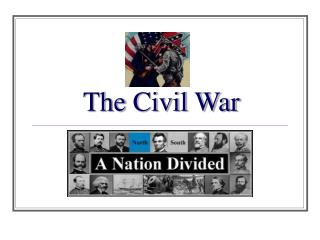 The Civil War. The Union. The Confederacy. Presidents of the Opposing Sides. Lincoln’s Aims and Actions. PRESERVE THE UNION “Nothing more than Shay’s Rebellion or the Whiskey Rebellion” Constitutional issue – Not a war over slavery Calls out state militias Increases the size of the Navy