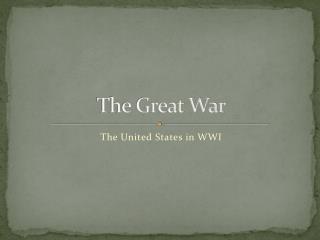 The Great War. The United States in WWI. Bell Ringer:. Do you think that it would have been possible for the US to remain neutral in WWI? Why or why not?. Four Main Causes of World War I. M-A-N-I-A Militarism Alliance System Nationalism Imperialism Assassination. Militarism.