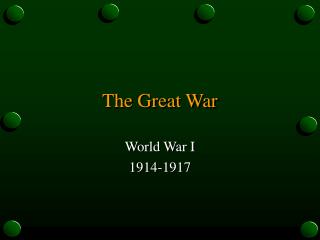 The Great War. World War I 1914-1917. Illusions. Many people thought the war would be quick and easy (on both sides). Propaganda. Ideas spread to influence public opinion for or against a cause. Two Front War. The Western Front. Schlieffen Plan Stalemate Trench Warfare.