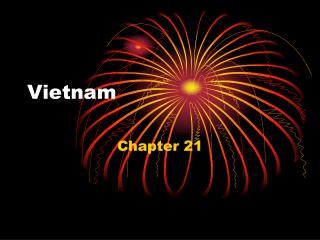 Vietnam. Chapter 21. -Vietnam was a colony of France until 1954. -Originally called Indochina. -Vietnam won its independence from France with a revolution led by General Ho Chi Minh. -Divided into N. and S. Vietnam at Geneva Conference. -North was Communist led by Ho Chi Minh.