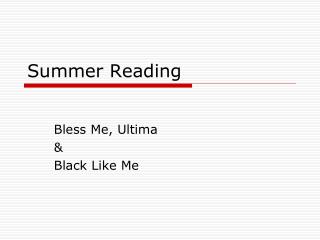 Summer Reading. Bless Me, Ultima & Black Like Me. Day 1:Focused Note -Taking. Essential Question: What major events ended Antonio’s childhood?. Journal. What do you remember most about Bless Me, Ultima ?. The Three Big Themes. Family expectations vs. personal desire