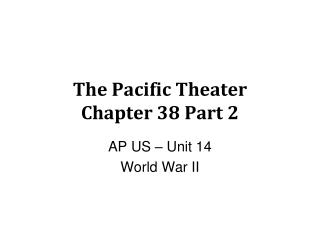 The Pacific Theater Chapter 38 Part 2. AP US – Unit 14 World War II. While the Allies agreed that the defeat of the Nazis was their first priority, the United States did not wait until V-E Day to move against Japan. Antibiotics – Part 1: Chapter 38 - . what is an antibiotic?. a medication that kills bacteria or slows their growth are

Chapter 38 (Sec. 2 ) - . comma splices and fused sentences. what is a comma s plice ?. a comma splice is two main clauses